BITE necks come in two versions, with narrow and wide string nuts. You can combine any of those with Punch and Jawbone bodies as you like.

With the wider PB-type necks, things are not as straightforward. Their nuts can generally range from 41,3 mm (1,625") to 44,5 mm (1,75"). The wide BITE neck has a width of 41,9 mm (1,65"). That gives you noticeably more wood between your fingers than our narrow neck, but the width is still within the lower third of the overall PB bandwidth for comfortable playability. 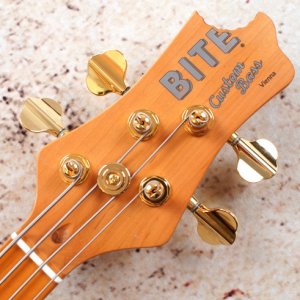 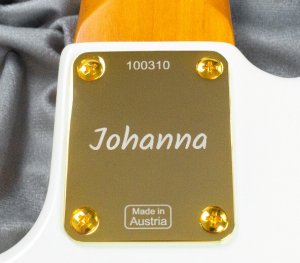 A firm connection for Johanna and you

The be-all and end-all of a good neck it its stiffness. If a neck lacks stiffness, the best pickup can accomplish just as much as the glossiest finish. A bass with a limp neck has no chance from the onset, will never be a killer.

Apart from bolt-on, there are also glued neck joints which are generally just as bombproof. However, a bolt-on joint has the clear advantage of easy maintenance. You can replace the neck in no time, just in case your bass gets run over by the bus again. That said, bolt-on needs to be done right, there is in fact a wrong way to do it. There's more to it than just driving a couple screws in really hard.

A firm connection for Johanna and you 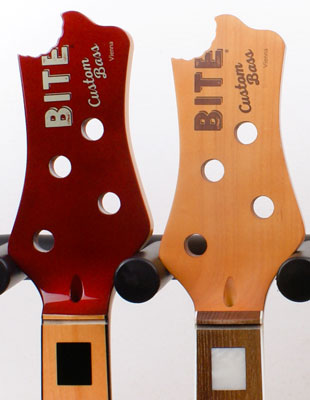 Here's our challenge: One look at this headstock and you'll be able to draw it from memory three months later. Send us your drawings

Headstock Shape
Here's how the distinctive BITE headstock came about. When designing a headstock, the first question you have to answer for yourself is, straight or angled?

As nice as an angled headstock may look to some, the problem is its superb leverage. Those neck fractures in the rehearsal room, when a leaning guitar hits the ground, they're all angled headstocks. So if your aim is stiffness and high output, the straight headstock is kind of a no-brainer.

The next question is where to place the machine heads. Traditionally, straight 4-string headstocks come with all 4 tuners pointing left. Those 4-left shapes all differ slightly between manufacturers for copyright reasons. We are used to them, they are beautiful, granted.

Here's a little experiment for you: can you draw five different 4-left shapes without looking them up in Google? You probably can't, they're all pretty similar. Now draw the BITE headstock. See? It's memorable and it carries a message: your BITE Custom Bass bites through the mix, come what may. 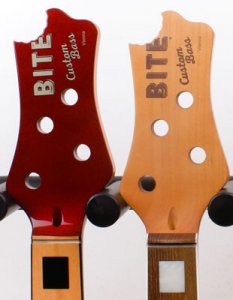 Here's our challenge: One look at this headstock and you'll be able to draw it from memory three months later. Send us your drawings 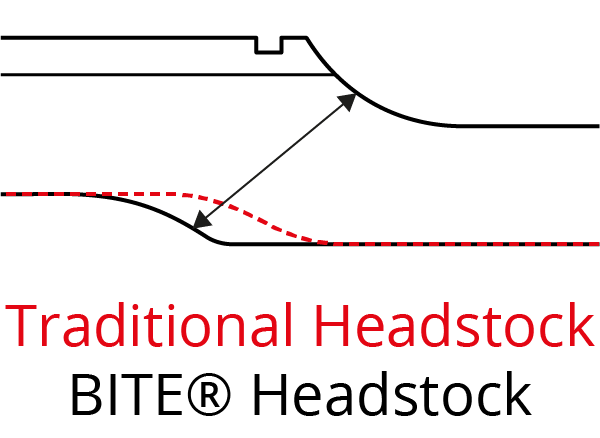 Reinforced Headstock Heel
The neck-headstock transition is the thinnest spot of any bass guitar. Exactly at this weakest of all spots you also have the cutout for the string nut plus typically the opening for truss rod adjustment. The sum of all this ain't good news for the firmness of the whole system.

If one day a neck snaps, it's going to be exactly there. If your bass sounds weak for no obvious reason, this juncture is quite often, though not always, the right spot to look at.

This is why we went an extra mile by adding wood to the headstock heel cross section. It is 30% larger than common standard. Does this affect playability? No, it doesn't. Nobody puts their fingers around the string nut. Does it affect the sound? You betcha. A reinforced neck structure is gonna yield a reinforced output.

Fun Fact: The headstock heel is often referred to as volute, actually kind of a misnomer, a meaning transferred from violine making. The volute actually denotes the shell spiral at the end of a bowed instrument's neck. 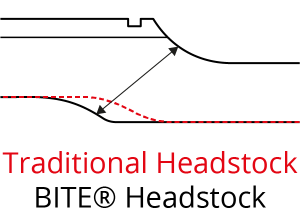 A tuned set of 4 strings exerts a pull of 1000 Newton on the neck. Owing to the double truss rod, neck relief no longer is the accidental product of string tension, temperature and humidity but a largely autonomous and stable parameter.

On our standard 4-string basses, the truss rod can be adjusted at the headstock heel with a 4 mm hex wrench (included in our toolkit). On individual 4 & 5-string builds, truss rod adjustment can also be individually positioned at the neck heel with the same 4mm hex wrench. 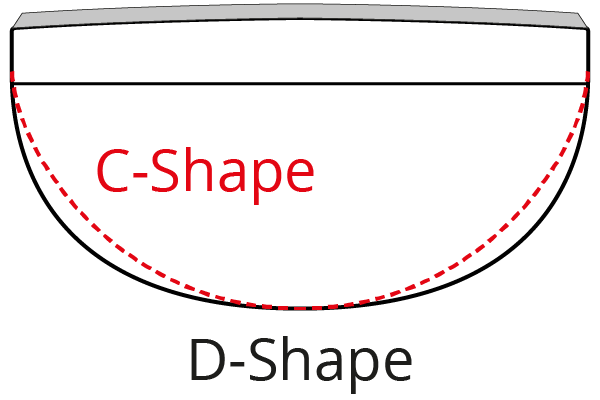 Neck Profile
What is a neck profile, some have asked. Imagine you cut necks into pieces along a fret. The revealed cross-sections are likened to letter shapes. What is true for nut widths, holds also true for neck profiles: They are mostly a matter of personal likes or dislikes. Most bass players prefer a C profile for its smaller shape, others favor D for its better grip. Our standard neck profile is C, we offer D necks against an upcharge.

Neck Thickness
Our neck thickness is ubiquitous C-shape standard: 21mm at the 1st fret, 23,5mm at the 12th, 28mm at the 14th. Despite CNC routing, neck sanding still involves much handwork, so you always have to allow for little tolerances. 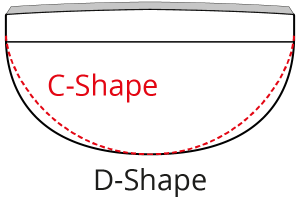 BITE necks are made from rock maple, the worldwide mainstay for guitar necks. No other commercially available wood features this combination of stiffness and workability. Rock maple is also used for everything else that's long and thin and needs to be stable, such as baseball bats and billiard cues, and it yields maple sirup.

Most bass players see a high-gloss surface on the back of the neck as sticky and annoying. Therefore, all BITE neck models, including those with a gloss coated maple fretboard, have a satinated back for fast thumb sliding. 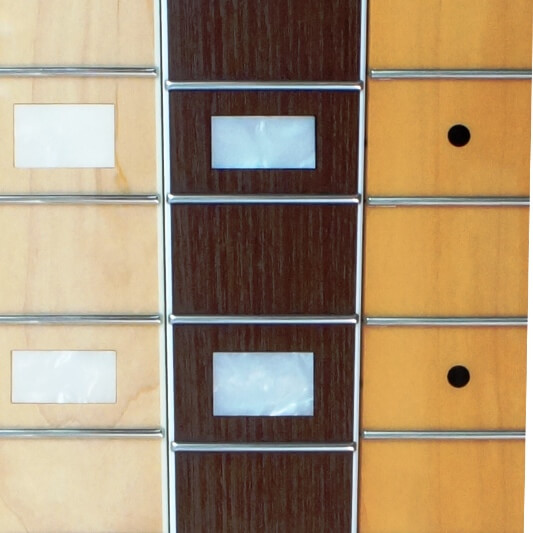 Wood
Until recently fretboards were almost exclusively made of just two kinds of wood, the dark ones of rosewood, the light ones of maple. The naturally dark rosewood needs no finish, its surface remains exposed, whereas the blond maple is sealed with clearcoat to keep it from darkening through usage.

Maple fretboards are a no-brainer, the challenge is rosewood. It had been chopped down worldwide on a massive scale in recent years. Between 2005 and 2015 global annual turnover exploded from 30 million to over 2 billion dollars. The main reason was the rampant demand for Chinese furniture manufacturing. As a result, since 2017 all 300 rosewood species are subject to the protective regulations of the Washington Convention (CITES).

What does this mean? Anyone who wants to sell an instrument with a rosewood fretboard or travel with it across a customs border could be liable to proove the time of purchase (before 2017) or produce the manufacturer's CITES permit. Though many countries allow noncommercial movement and trade of musical instruments without permits, regulative implementation remains inconsistent and confusing.

Bottom line: rosewood means stress for the environment, possibly stress for you and certainly stress for us in procuring the permits for commercial use.

However, rosewood is not a must. There are a number of commercially available fretboard woods with a similar set of properties: hard but flexible, rich in natural oils, workable and with a naturally dark hue throughout, such as pau ferro, wenge, ovangkol, granadillo or ebony.

But there's a catch: they all come just as much from tropical rainforests. As rosewood substitutes they are increasingly in demand and will be harvested until one day they too need to be protected.

So we went one step further and started looking for a sustainable solution from Austrian forests and experimenting with different woods and thermal modification processes. We finally found what we were looking for right in our backyard, the Vienna Woods: Robinia pseudoacacia, commonly known as black locust or false acacia.

Black locust is the only European wood in durability class 1/2 according to DIN EN 350-2 (DIN 68 364), it is the hardest Austrian wood species, harder than American rock maple. In the core parameters modulus of rupture, elastic modulus and crushing strength, black locust even exceeds rosewood.

Black locust is rich in natural oils and through a gentle steaming process it obtains that nice dark color tone without damage to the cell structure - this all makes black locust the ideal rosewood substitute.

But wait, there's even more!

Originally native to North America, black locust was introduced to Austria by Empress Maria Theresa in the 18th century as an ornamental plant. Being the resilient pioneer plant that it is, the black locust soon left the baroque gardens for the Austrian wilderness and now in some areas even corners the indigenous vegetation. Guess what, your black locust fretboard on top of all contributes to maintaining a balanced biodiversity. Take that, rosewood fretboard!

Anyone still asking about the tonal properties of a black locust fretboard? Then we're probably left with nothing else but rolling our eyes, pointing towards scientifically sound literature and maybe whining a bit, barely audibly though. 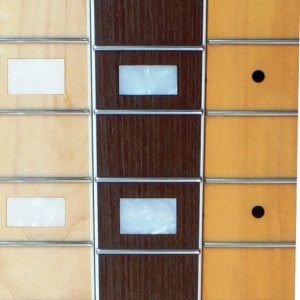 Inlays
Granted, animal mother-of-pearl from mussels and abalones looks kinda nice at close range, but let's be honest, it's not what makes a bass respectable. Inlays work just as well without any animal material. Our dots and blocks are made of an abrasion-resistant composite material and that's that.

Side Dots
Our basses have side dots where you'd commonly expect them, double dots at the 12th fret.

Those are our core hours. Quite often we are on call at additional times including weekends, just give it a try.

Our contract language is English, meaning that our confirmation mails, invoices and most of our communications are in English.

However, we’ll do our best to accommodate your communications in the languages shown below.